US PER COUNCIL PROJECTS

APPROVED! The LoWay Transportation Alternative Initiative has been approved by the Rainier Beach Community and passed into ordinance by the City Council of Seattle.

Rainier Beach 2014...a plan for a sustainable future provides links to pdf's of the complete plan.

Below are two views of the LoWay Transportation Alternative. Note they are not showing the 'strut in tension' design that will be used in the prototype from Tukwilla to Seattle. The housing modules shown on the video, will be manufactured and attached on-site as construction proceeds. 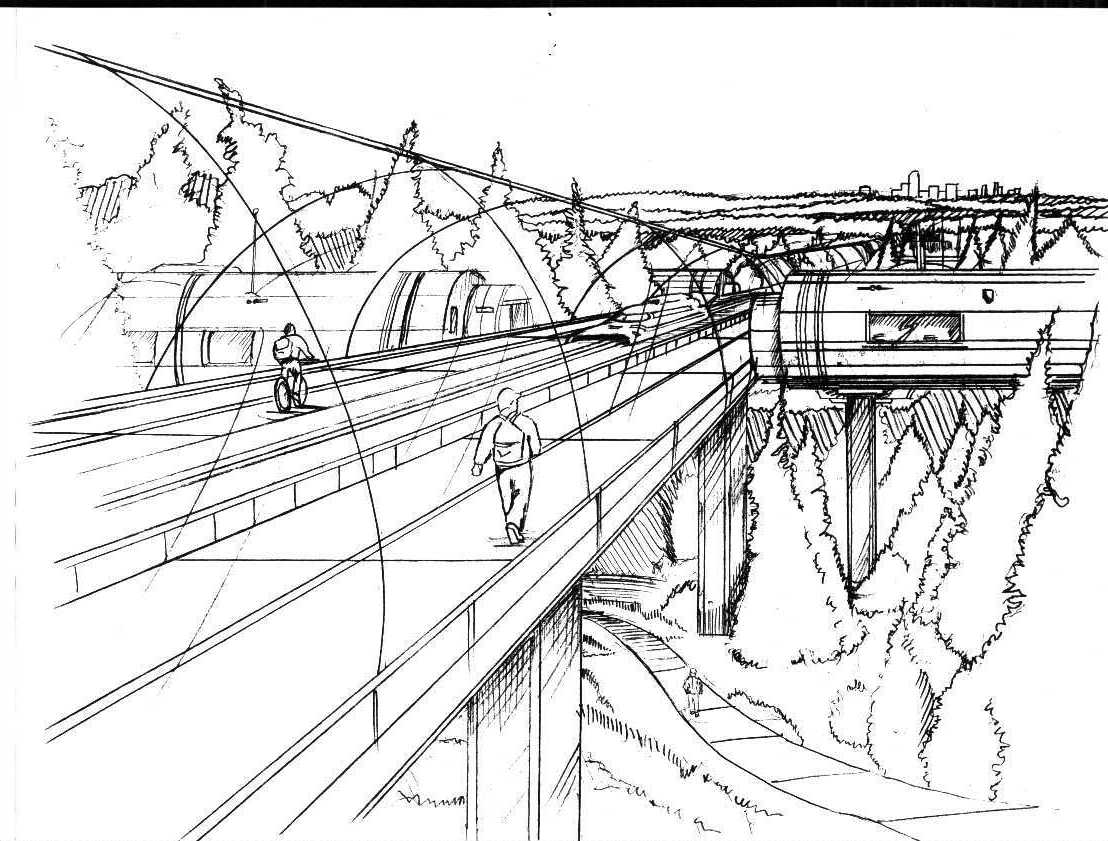 Traffic congestion and adequate housing may be Seattle's only faults. Traffic congestion nationwide in 1990 was measured as costing, on average, 200,000 hours of delay and $860 million in fuel costs and delay time. 1.

The President's Council on Sustainable Development, Energy and Transportation Task Force has proposed in their report Goal 3:

Sustainable Transportation: Improve the economic and environmental performance of the U.S. transportation system while increasing all Americans' access to meaningful jobs, services, and recreation.

Indicators of Progress: Increasing Access: Improve the rural and urban accessibility of jobs, markets, services, and recreation and thereby increasing the share of trips made by alternatives to personal motor vehicles to 30 percent by 2025.

Forecasts: The number of conventional corporate employees who telecommute rose form 2.4 million in 1990 to 6.6 million in 1994, according to Link Resources and Find/SVP. Find/SVP estimates that the figure will climb to 11 million by 2000. If contract workers are included, all of these numbers will rise by 25-30 percent. 4. A 1991 Harris Poll showed that 23 percent of U.S. adults would sometimes commute to work by bicycle if safe bicycle lanes or paths were available. Three out of six adults said they would walk more if there were safe paths or walkways. Five percent of adults reported walking or bicycling as their primary means of transportation; but given adequate facilities, 13 percent would prefer to meet their transportation needs by walking or bicycling. 5.

Seattle's Comprehensive Plan, Toward a Sustainable Future, affirms "Seattle's commitment to sustainability is supported by this plan." 6. The Plan commits itself to promoting walking or bicycling on 46 of its 130 plus pages beginning on page ix, "The urban village strategy combines small changes in the city's development pattern with a more complete and competitive intermodal public transportation system" ... and ending on page 95,  "2. Facility Siting C7. Seek to locate capital facilities where they are accessible to a majority of their expected users by walking, bicycling, ..."

A Proposal from Rainier Beach Neighborhood 2014...a sustainable future... The Loway Transit Alternative. The United States has an excellent highway system and has more than completed it freeway system. It is time to start building another transportation infrastructure for people not cars, the loway system. The loway is sustainable, inclusive and brimming with adjunctive benefits. It is adjacent to the existing freeway system, using the greenbelts and airspace and it makes use of the 15,000 miles of existing land beneath the transmission network of BPA. The loway is an all weather Zero Emissions Lane for pedestrian, bicycle, wheelchair usage or for those commuters desiring to enjoy a breath of fresh air, in a safe and protected environment, while going from A to B. It can be built rapidly using available funding sources such as the Intermodal Surface Transportation Efficiency Act of 1991's environmental enhancements provisions and matching funds from private business looking to use this space as a continuously connected home office, or from the mandated desire to house nearly 9000 homeless in the King County region. If 13 percent of Americans would prefer to commute by bicycle if a safe area were dedicated for alternatives, Seattle might look to the day where half of its commuters would enter the loway to connect and work wherever the mood strikes them. Seattle ranks sixth in Canada and the US for bicycle use, sadly, it ties for first place with the worst traffic in the nation.

Description: The loway is an elevated (three-five meters high) enclosed half cylinder (nine meters wide)  of transparent material. Attached are cantilevered owner/occupied home/offices (OOHO's 450-900 sq./ft), which are manufactured on site as the LoWay constuction progresses. The half cylinder contains a supply of fresh air and water with power supplied by photovoltaic roof panels, providing a clean environment for travel or work next to the freeways. It is constructed entirely at site using a strut in tension support. The surface is divided into three lanes, the center for small electric emergency vehicles.

Direction: This alternative plan is directed to three parties. It needs the cooperation, not funding, of BPA, and regional utilities. On December 5, 1997, the Regional Review Steering Committee completed their final report on Northwest electric utilities. On December 12, they presented their report to the Northwest governors who then accepted their recommendation. In part their recommendations included:

7. Northwest electric utilities should spend $21 million annually on energy conservation, renewable energy and low-income weatherization, most of it locally, according to the final report of the Regional Review steering committee approved on Thursday, Dec. 5. ... In addition to public purposes, the report contains recommendations on federal power marketing (including a subscription-based system for marketing federally produced electricity), transmission (including formation of an independent grid operator) and direct retail access for all customers by mid-1999.

The LoWay Alternative proposes the assumption of the 15,000 mile grid from BPA's present oversight and management, so that it can be used to a greater advantage with a variety of uses. The prototype construction, having now been passed by the City Council, begins within the nine-mile corridor along Interstate 5 and beneath the transmission lines south of Seattle to Renton. The proposal is directed to Washington State Department of Transportation which have decided to not expand on the width of I-5 using the available land is adjacent to I-5. Finally the proposal directs its attention to private business, who through pre-leasing or sales of Owner/Occupied Home/Offices along the LoWay, will provide the stimulus for its development.